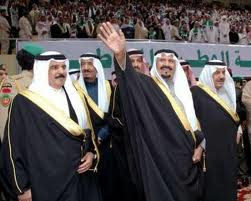 Sultan was the half-brother of Saudi Arabia's King Abdullah, who is two years older than him and has also been ailing and underwent back surgery last week.

The most likely candidate to replace Sultan as Abdullah's successor is Prince Nayef, the powerful interior minister in charge of internal security forces. After Sultan fell ill, the king gave Nayef – also his half-brother – an implicit nod in 2009 by naming him second deputy prime minister, traditionally the post of the second in line to the throne.

The announcement did not say where outside the kingdom he died or elaborate on Sultan's illness but Saudi official circles in Riyadh said he passed away at a hospital in New York. Saudi royal family members typically received medical treatment in New York.

Sultan, who was the kingdom's deputy prime minister and the minister of defense and aviation, has had a string of health issues. He underwent surgery in New York in February 2009 for an undisclosed illness and spent nearly a year abroad recuperating in the United States and at a palace in Agadir, Morocco.

"With grief, King Abdullah bin Abdel Aziz mourns the death of Sultan bin Abdel Aziz Al Saud, crown prince and his brother," the palace said. The statement, which was carried on the official Saudi Press Agency, added that Sultan's funeral will be held on Tuesday afternoon in Riyadh at the Imam Turki bin Abdullah mosque.

For the first time, however, the mechanism of picking the next crown prince is not entirely clear.

It is possible the king will for the first time put the decision of his heir to the Allegiance Council, a body Abdullah created a decade ago as one of his reforms, made up of his brothers and nephews with a mandate to determine the succession.

That would open the choice up to a degree of debate with the top echelons of the royal family. Nayef, however, will still be the front-runner.As defense minister, Sultan closed multibillion deals to establish the modern Saudi armed forces, including land, air, naval and air defense forces.

On more than one occasion, the deals implicated several of his sons in corruption scandals – charges they have denied.

Sultan is survived by 32 children from multiple wives. They include Bandar, the former ambassador to the United States who now heads the National Security Council, and Khaled, Sultan's assistant in the Defense Ministry.

Frank Lampard provided the perfect response to his recent critics with a superb hat-trick as Chelsea demolished Bolton Wanderers 5-1 at the Reebok Stadium.
The veteran midfielder, who was hauled off at the interval in the defeat at Old Trafford, before being dropped to the bench for Chelsea's subsequent Premier League game against Swansea, scored three goals in just 59 minutes.
Daniel Sturridge opened the scoring with just two minutes gone at the Reebok before Lampard doubled Chelsea's lead shortly after. Sturridge scored his second goal of the game after 25 minutes with Lampard capitalising on a mistake by Bolton goalkeeper Adam Bogdan to make it 4-0.
Dedryck Boyata gave Bolton hope with his goal shortly after the interval. But Lampard completed his hat-trick on the hour mark to put the result beyond doubt.
The result sees Bolton glued to the bottom of the Premier League with Chelsea leapfrogging Newcastle into third.
Posted by 24 Hours News Update at 07:32 No comments:

700 arrested on Brooklyn Bridge after protest

More than 700 protesters demonstrating against corporate greed, global warming and social inequality, among other grievances, were arrested Saturday after they swarmed the Brooklyn Bridge and shut down a lane of traffic for several hours in a tense confrontation with police.They sleep on air mattresses, use Mac laptops and play drums. They go to the bathroom at the local McDonald's. A few times a day, they march down to Wall Street, yelling, "This is what democracy looks like!"
It all has the feel of a classic street protest with one exception: It's unclear exactly what the demonstrators want.A real estate firm that owns Zuccotti Park, the private plaza off Broadway occupied by the protesters, has expressed concerns about conditions there, saying in a statement that it hopes to work with the city to restore the park "to its intended purpose." But it's not clear whether legal action will be taken, and police say there are no plans to try to remove anyone.
"We see it as our job to make certain that people can demonstrate peacefully," Kelly said.
Mostly, the protests have been peaceful, and the movement has shown no signs of losing steam. Celebrities like Michael Moore and Susan Sarandon even made recent stops downtown to encourage the group.
Seasoned activists said the ad-hoc protest could prove to be a training ground for future organizers of larger and more cohesive demonstrations, or motivate those on the sidelines to speak out against injustices.
"You may not get much, or any of these things on the first go-around," Daughtry said. "But it's the long haul that matters."
Posted by 24 Hours News Update at 03:45 No comments:

WELLINGTON, New Zealand — Three Boston University students who were studying in New Zealand were killed Saturday when their minivan crashed. At least five other students from the university were injured in the accident, including one who was in critical condition.

The students were traveling in a minivan at about 7:30 a.m. Saturday near the North Island vacation town of Taupo when the vehicle drifted to the side of the road and then rolled when the driver tried to correct course, New Zealand police said.

Three of the students died at the scene, police said. Another woman was in critical condition at an area hospital, while at least four other students suffered moderate injuries.All of the students except Theriault were enrolled in a BU study abroad program in Auckland, the BU website said. Theriault was enrolled in a study abroad program in Sydney, Australia.

Sixteen students were traveling in two minivans, on their way to hike the Tongariro Crossing, a famous trek rated as one of the most spectacular in New Zealand. The hike crosses a volcanic crater in the central part of North Island.

Kevin Taylor, a police official, said it was not clear why the van drifted to the side of the road. He said some of the students were thrown from the vehicle, indicating they may not have been wearing seat belts.
Posted by 24 Hours News Update at 10:26 No comments:

Manchester United retained their position at the top of the Premier League after they edged past Norwich.
Anderson headed in on 68 minutes while Danny Welbeck sealed the points after exchanging passes with Park Ji-sung.
The pattern of the game could have been different if Anthony Pilkington had taken one of two chances either side of United's opener.
But the Norwich winger shot wide when clean through and saw another effort hit the post on 75 minutes.
The hosts improved in the second period and could have extended their lead via Danny Welbeck and Wayne Rooney, who returned to the side after a hamstring injury.
However, they were made to work for the points on a glorious afternoon in Manchester, where the counter-attacking plans of Norwich boss Paul Lambert almost came to fruition.
That almost turned to despair soon after when Pilkington's shot was deflected against the post by the Brazilian, but with the game becoming more open substitute Welbeck played in Park down the right, before receiving the return pass and sliding in for his fifth goal of the season.
Rooney clipped the bar when he was clean through late on, while Welbeck was inches from scoring before he settled nerves three minutes from time inside Old Trafford.
United could have made it 3-0 with further chances, but Norwich's Andrew Crofts also had a shot saved and his side can come away from this encounter with some reason to feel hard done by.
The crucial difference was the finishing and it is a lesson which Lambert's side have had to take once again.
Posted by 24 Hours News Update at 09:33 No comments: